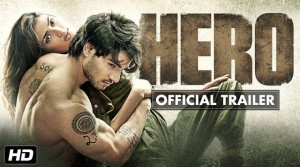 Hero 2015 Movie Review, Trailer, Star Cast & Story (Sooraj Pancholi and Athiya Shetty)
Hero 2015 Movie Star Cast:
Star Cast – Sooraj Pancholi and Athiya Shetty
Directed by – Nikhil Advani
Produced by – Salman Khan and Subhash Ghai
Presented by – Salman Khan Films
Hero 2015 Movie Review:
Hero is an upcoming Bollywood movie. The director of Hero movie is Nikhil Advani and Hero is produced by Salman Khan and Subhash Ghai. And story is written by Nikhil Advani and Umesh Bist. Hero is releasing on 11th September. The main thing about Hero is its lead characters and both of its lead characters are making their debut in Bollywood. Sooraj Pancholi and Athiya Shetty both are the USP of the movie and if you watch the trailer of the movie with a deeply you will find that the trailer is awesome and based of the trailer I could assume that the movie will be a masterpiece.

The music of the movie is composed by Amaal Mallik, Meet Bros Anjjan and Sachin-Jigar. The main USP of the movie is the title track of the movie which is sung by Salman khan and at the moment it is topping the chartbusters.By seeing the trailer of the Hero it is evident the movie will be full of high-end action scenes and the VFX work done in the movie Hero is simply awesome and breathtaking. If we talk about the acting part both Sooraj Pancholi and Athiya’s acting seems good and the chemistry between them is also awesome. If we talk about the plot of the movie, Sooraj is a villain who kidnaps Radha (Athiya Shetty) who is a daughter of the city’s Chief of Police. And after Sooraj and Radha fall in love later and after that there are some twists and tricks and for that you have to see the movie.

The plot looks promising and the action scenes are simply amazing and the music of the movie is also enthralling and will reverberate in your ears for long time. So my view is that do watch the Hero on 11th September, if u miss it u will regret it.
Hero 2015 Official Trailer YouTube
2015-09-09
Raman Deep Singh
Share